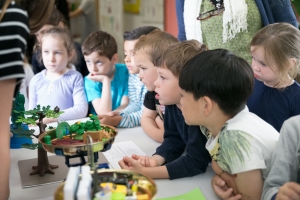 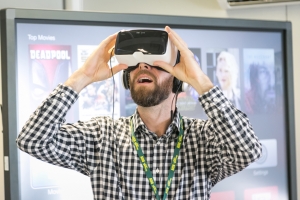 As we embark on our Step into the Extraordinary Capital Campaign to engage community support for our next project, the Design and Engineering Center.  Our objective is not just to build additional space for students, but to transform how we teach Technology and Design and break the educational mold on how we encourage our students to appreciate life-long learning.

There have been numerous articles written recently concerning the need to change our approach to education that will prepare today’s students for tomorrow’s future job market. In a recent article in The Independent (May Bulman, December, 2016) Bill Gates remarked that there are, ‘three skills … essential for success … it rules out anyone who doesn’t excel in science and numbers’. ‘People with three backgrounds will be the most in-demand in the coming years: sciences, engineering and economics.’

Likewise, a recent article in this month’s Washington Post detailed that, ‘bosses believe your work skills will soon be useless’; not a particularly encouraging remark! The journalist goes on to say that:

“Most of the business and technology professionals expected new training programs to emerge, both at schools and on the private market, to better prepare the future labor force. But thirty percent of the 1,408 respondents doubted such a quick transformation could take place. They felt … that ‘adaptation in teaching environments will not be sufficient to prepare workers for future jobs.’”

It is the role of this new center to adapt our current teaching environment, to transform the curriculum, to embark our students on such an educational journey into unfamiliar settings and expectations. In transforming such dreams into reality, the teaching staff will encounter what Machiavelli (1513), the quintessential rationalist and pragmatist, who is so often misunderstood, described so clearly in The Prince concerning the perils and traumas that beset those who try to change the existing order:

“There is nothing more difficult to take in hand, more perilous to conduct, or more uncertain in its success, than to take the lead in the introduction of a new order of things.”

Machiavelli’s (1513) comments concern the traumas, difficulties and perils of change; however, his rationalistic extremes are not quite so prevalent today as they were five hundred years ago in Florentine Italy, at least not in the school environment! Yet, the desire to unravel the paradoxes of human nature and its effect on change within society and institutions remain. It is the distance between our dreams and educational aspirations, and their operational reality, upon which we will shed light; the shadow between good ideas and their implementation, or as T.S. Eliot (1917) poetically described:

Between the idea and the reality

Between the motion and the act

Between the conception and the creation

Between the emotion and the response

The British author C. P. Snow whose perceptive eye focuses on the ‘corridors of power’ within academic institutions, also concurs in remarking that:

“In a society like ours, academic patterns change more slowly than any others. In my lifetime, in England, they have crystallised rather than loosened. I used to think that it would be about as hard to change, say, the Oxford and Cambridge scholarship examination, as to conduct a major revolution. I now believe that I was over-optimistic.”

Change we must if we are to fulfil our mission to engage, prepare and inspire. And we cannot do it alone – it takes a village to raise – and educate –  a child; hence our outreach into our community. There are many resources that we need to tap into; many parents who have direct involvement in the realms of technology (albeit, food, information, automation or robotics), material science and mathematics, as well as design, music, and film media.

We need your help with this new venture, because to face tomorrow prepared, we need to step into the extraordinary, today.