Back in the early seventies, when I was still at school (just), a social revolution was underway that was to transform society in so many different ways. San Francisco was at the heart of this social evolution; songs were published, books written that captured the age, typified by the generational anthem by Scott McKenzie, 1967, “San Francisco (Be Sure to Wear Flowers in Your Hair)“

While San Francisco, London and other major cities around world were experiencing this societal change, a book, entitled Future Shock by Alvin Toffler (1970) cautioned that “too much change in too short a period of time” will have profound, unknown consequences to “certain psychological state of individuals and entire societies”. This prescient message resonates loudly now as we witness even more radical changes in how we interact socially, politically and economically. Whilst the message, what has been will be again, what has been done will be done again; there is nothing new under the sun (Ecclesiastes 1:9), reminds us of the repetition of the human condition; but, we are living in different times unlike any other.

Why? Because technology is changing everything. The reports from current research into the effects of technology usage is staggering negative as well as impressively positive; it depends on how the technology is being used. How we respond to this dichotomy is a constant battle and an immense common challenge for us all.

The Independent – Phones and Cocaine 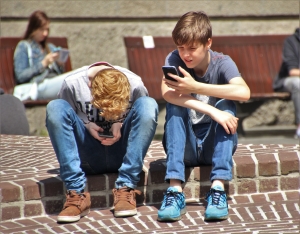 Health for All Kids

There is now a recognized problem of technology addiction, children who are attached to their screens hour upon hour during the day. Rehab centers are being established; intensive recover programs are being instigated; it gets bleaker with every report that surfaces. Children who are sleep deprived; notable increases in teenage depression and asocial behaviors; smartphone addiction being likened to a cocaine habit. Smartphones, tablets and other mobile devices can be so stimulating and entertaining that they “override all those natural instincts that children actually have for movement and exploration and social interaction (Hilarie Cash)

So, the solution? Perhaps we should take notice of those who started this revolution (Steve Jobs et al.) who ensured that their children were brought in low-tech environments, where play, outdoor activities and social interaction were emphasized.

So, Mr. Scott McKenzie was onto something, we need to be people in motion.