How do Music and Math Fit Together?

Led by Mr. Lawson and Mr. Lacher, students in Grade 5 are learning about the different kinds of musical note values and the duration of each note. The teachers are taking this opportunity to authentically inquire into the mathematical concept of fractions, as applied in music.

As students were introduced to musical note values, they folded and cut paper to create strips that showed the fractional relationship between the note values. Yigit in 5KM explained it by saying, “A whole note is four beats, so a half note is two beats. A quarter note is one beat or half of a half note, so that’s why we call it a quarter note. We’re doing fraction work in our classroom too, and it’s cool because I love math and now I’m doing both.”

After making the paper note values, students spent time arranging them into four-beat measures to create a four-measure composition. They then performed their rhythmic compositions using chanting and clapping. Next, students will add pitch to their compositions, creating melodies.

At AISB we know that learning is most meaningful when it is contextualized and connected to other learning. It helps students realize what they are doing, allowing them to uncover relationships among ideas in the world around them. 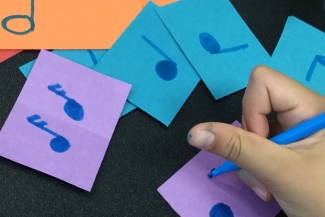 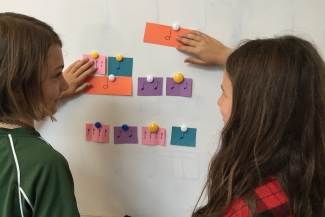 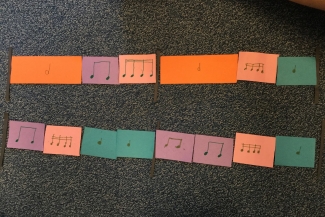