The American International School of Bucharest presents “Brainstorm” by arrangement with Nick Hern Books. “Brainstorm” is an Original Playscript developed by Ned Glasier, Emily Lim, and Company Three, with original material devised by the AISB cast.

The play will premiere at the AISB Theater on Thursday, November 21 at 18:00 and another performance is scheduled for Friday, November 22 at 16:30. The first ever script to be written by AISB students, ‘Brainstorm’ explores the concept of teenage identity, by tackling the subject of daily teenage lives and emotions of different individuals of various ages. Join us to watch this moving rendering of adolescent day-to-day story, as told and acted by our very own AISB students!

Lauren D., reporting for AISB’s newspaper, the Bite, has picked up this story and tells us all about ‘Brainstorm’ at AISB. Check out an excerpt below and read more at: 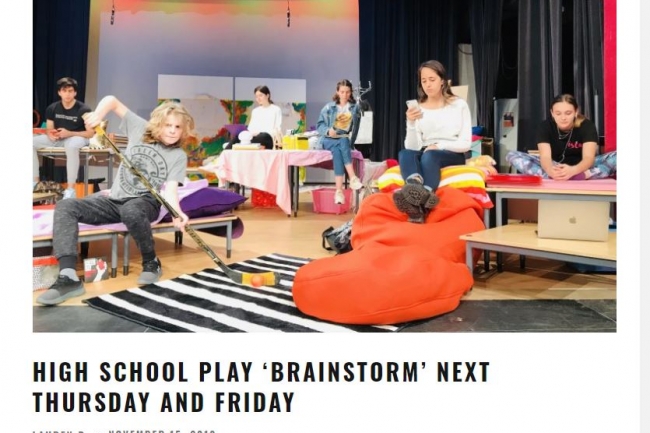 Building up to the performance

Once the play was chosen, AISB Director Peter Welch visited the theater production team to share his expertise on teenage brain development. With his help, the play developed to effectively convey emotions and underlying messages.

The actors of the play point out that there’s a big age gap between the cast (all 9th and 12th graders), which makes the script quite interesting. This means that the audience will be able to see the changing perspectives of teenagers as they get older.

Cast member Vaida Z. adds that the small-sized cast allowed students to express themselves freely in the script. “It was a very positive community where the students could really express what they do on a daily basis,” he says.